What I Recent Read: "Hana and Earth" by Sanae Uno 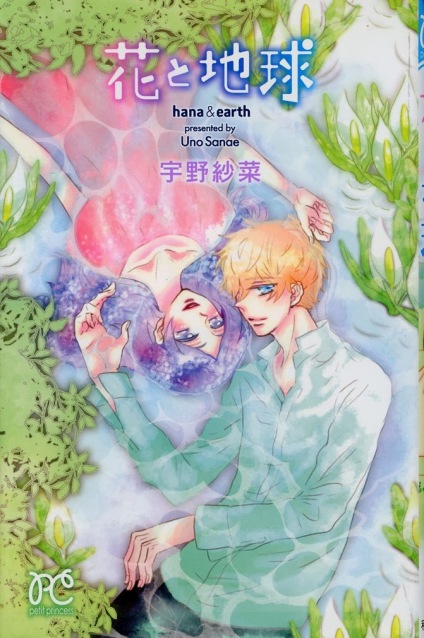 Synopsis:
Hana dreams of running her grandparents’ healing herb cafe and living an idyllic life under the skies of Hokkaido one day. When her grandparent retire to the city, Hana’s quits her corporate job and takes over their cafe and sundry store business. Enter Earth. A long-time customer of the store recommends him as part-timer, but says he doesn’t like to be touched.  Earth is a socially-awkward 20-year-old college student who hides his face under glasses and long bangs. When Hana tries to move his bangs, Earth accuses her of sexual harassment. It turns out that Earth is suffering the after effects of middle school bullying. Can Hana bring Earth out of his shell? And how do the two handle their budding attraction to one another.

Volume 1 covers chapter 1 through 4, and the entire series spans two volumes.
——————–
Initial Impressions: Oh wow! The cover art is gorgeous! Honestly, I bought this book based only on its cover. Ugh… the first chapter doesn’t have much momentum. It’s slowed down by too much atmosphere.

Artwork C+: A lot this is a style preference.  The cover is gorgeous and watercolored. Unfortunately, this didn’t didn’t translate well into black and white. The lines aren’t as delicate and panels are sparse.

Also, all the characters’ eyes are huge. I realize this is shoujo manga, but the huge eyes make poor Earth look like a man-toddler. Still the artwork is serviceable. It conveys emotions and I can tell the characters apart.

Presentation B: I really wish the frontis pages that were originally in color were left in color. It’s a shame because they have the same watercolor look as the cover. Moving on, there are some nice little 1-page extra comics between the chapters and information about herbs and decorating with herbs are scattered throughout the volume. It’s nice between the chapters, but it can get a little distracting when they are in the chapter. As for the text, it’s readable. The mangaka’s handwriting is stylized, but once you grasp her style, it’s not hard to read.

Story C+: This is a very mediocre story executed in fairly mediocre fashion, but there is potential for a better second volume. The only thing that sets this series apart are the character’s nam

es.  They are all natural and in some way describe the characters’ relationships to one another. So far there’s Hana (flower), Earth, Moon, and Sui (Comet). As for the characters themselves, Earth and the two side characters have potential, but Hana is very one-dimensional.. Hana is happy and warm, but somehow feels empty to me. Earth is awkward, but youthfully honest. He’s also somewhat possessive. (The story could get interesting if the mangaka chooses to confront that side of Earth. Is this manly possessiveness or childlike possessiveness?  Hahaha! The “gravity of Earth” and its influence over a flower, the Moon, and a comet… Is this mangaka that clever? This is what makes me want to read the second volume.  To continue the pun: there is potential.) Moon is an “ojou” who makes magical girl accessories, and Sui is a touchy-feely prankster who has been all over the world. Unfortunately, the story hasn’t dealt with any tough issue yet. Hana is 26 and Earth is 20, so the primary tension is Hana’s feelings about the age gap. I, as the reader, don’t see this a problem, but I wonder whether this is a problem for a Japanese reader. Or whether this is just to highlight Hana’s own insecurity about herself. She seems to have already reconciled herself to spinsterhood despite her age. While reading this, I mostly picked up on Earth’s possessiveness. This is what interests me and this is what makes me want to read the second volume. I will be disappointed if the rest of the story ignores this tension.

Readability — Easy: This series has Furigana and uses common “shoujo vocabulary”, so if you’ve read a lot of shoujo, you won’t be consulting your dictionary often.  Also, many of the names of the herbs are in English in the illustrations, so when the Katakanas are mysterious, just looks at the drawings and you’ll see what Hana is talking about. In general, though, the vocabulary is common, so if you are learning N3 vocabulary, it should be a fairly smooth read. Also, the mangaka’s phrasing is simple. There aren’t any gnarly run-on sentences and I don’t remember any slang usage.

Overall B-: The story is initially weighed down by too much store practices and herb exposition. But once the mangaka finds a balance between atmosphere and storytelling, the pacing improves. If you like this kind of predictable shoujo, I recommend it. Also, for intermediate Japanese language students who like shoujo, this is a good pick for reading practice.