My Thoughts on “Seiten Kickoff” Chapter 2

I’m seriously trying to face plant, but I know if I don’t do this before I take a nap, I won’t sleep restfully. I’ve been unintentionally putting this post off for too long because I kept working on September projects and Halloween oneshot party stuff. Anyhow, I hope I don’t make too many typos in my stupor.

Once again the characters in “Seiten Kickoff” impress me. I love how Hayate tells Yuuto to back off with the overprotective act. I feel like it’s the first time I’ve seen a shoujo heroine speak up without hesitation and straight up tell a boy, I do reckless stuff all the time, cool your hero jets, sempai. Of course she’s not taking his feelings into consideration, but at least they had the discussion. It’s not as if Hayate is gonna stop jumping out of second story windows like a fool because sempai says not to. I also like how Hayate never asked “what should I do?” while she was trying to figure out the reason Yuuto acts protective. Instead she stubbornly tried to figure it out herself as though she’d been personally challenged. And then when he finally told her what he meant, she didn’t go all passive with “He loves me, what should do????” act. Instead she strikes back with a forehead kiss. I had a good laugh at that one. It’s like Hayate thinks showing affection is like scoring points in a game.

I like that Hayate doesn’t bend for Yuuto. She remains true to herself and doesn’t hesitate to tell Yuuto where to shove the manly bull crap. Oh! And then the kicker! There was no Hayate hemming and ha-ing over wearing a kimono. She wore it as natural as can be. And none of her friends said anything about being surprised Hayate agreed to wearing a kimono despite being a jock or Hayate having some dumb inner monologue about how girly she feels. That was one stupid shoujo stereotype blown away like dust.

Yuuto… My boy is not a push over. He’s an aggressive offensive player like Hayate and, my gosh, Hayate recognizes that! So far he’s been getting in that last kiss after Hayate makes her move, but I don’t feel like it’s him getting the better of her, so much as he’s being a tough competitor that forces Hayate to up her game. Although he was a bit of a sore loser when couldn’t scoop the gold fish. Hayate scored a point with that, so he had to turn the tables and “capture” her. And let’s not forget about the little jealously streak Yuuto showed while he and Hayate were helping the little boy, Keisei. I do wonder whether he and Youichi are going to confront each other over Hayate. I don’t think Youichi necessarily thinks of Hayate as anything more than a friend, but just like any friendship, it’s easy for the friend who’s not in the relationship to feel lonely.

I can’t wait for the next chapter! Unfortunately, that’s not going to arrive here until late October because the series is quarterly. What I want to see next or in a future chapter is Hayate get to play in an exhibition against another all-male team, and she, Yuuto, and her teammates handle a chauvinist asshole who either tries to hurt or hurts Hayate by somehow fouling her in play. I really want to see what kind of offensive player Yuuto is. Will he let it go, or will he find the guy behind the gym, kick the dude’s ass, and never tell a soul what happened. You know the later is what I’m craving!

Anyhow, here are some of my favorite scenes from the chapter 2. I loved every Hayate action scene. 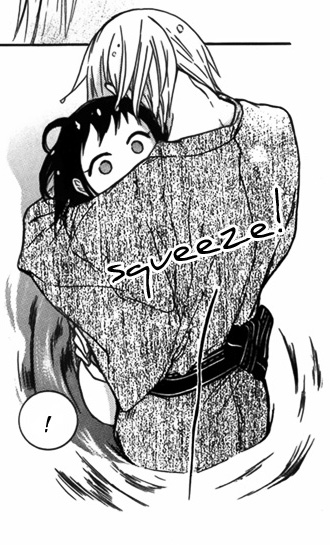