I’m working my way through my backlog of shoujo manga magazines. Continuing on with Cheese!, Rei Toma’s new series debuted in and is on the cover of this issue of Cheese! The furoku is a compact copy of the first volume of Rei Toma’s “Dawn of the Arcana”.

Here’s what I read: 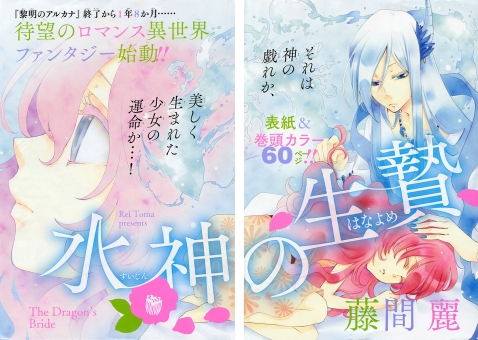 A pond in her backyard pulls bright-eyed and brushy-tailed grade-schooler Asahi into another world or perhaps the past. While lost in a forest, Asashi meets Tsubaru, the son of the nearby village’s chief, and Shiina. Asahi is unable to return home so Tsubaru pleads to his parents to let the strange girl live with them. Tsubaru’s mother agrees under the condition that Asahi become their daughter. Unbeknownst to Asahi and Tsubaru, becoming the village chief’s daughter means that Asahi will be sacrificed as a “bride” to the Lake God.

Art  B-:  It’s the same serviceable simplicity typical of Rei Toma. It doesn’t really strike me as anything special. Asahi’s blank, wide-eyed smiling face bothers me. She looks like a creepy doll.

Story C: Again there’s nothing special here. I forgot the first chapter soon after reading it and I didn’t feel any motivation to read chapter 2. I think the protagonists are too young for me to connect with and I’m turned off by the notion of a child bride. The one bright spot was Tsubaru’s threat to his mother when he promised to avenge Asahi.

Readability — Easy: The vocabulary is typical shoujo and there’s very little text to deal with compared to most shoujo works. This is a very straightforward read for Japanese learners with intermediate skills.

Overall — Meh. I’ve seen through chapter 3 and… well, chapter 2 is meh, but chapter 3 looks interesting. Growing up the protagonists soon could save this series for me.

Ri’ichi confesses to Haru in the hope of getting her away from the teacher Sakaki. Sakaki isn’t moved by Ri’ichi’s display of affection, or so Haru thinks, never mind Sakaki’s not so subtle possessive behavior. Haru tricks Ri’ichi into believing she’s broken up with Sakaki so that he won’t tell Haru’s father of her and Sakaki’s relationship, thereby risking Sakaki’s job. In an aggressive move at the end of the chapter, after posturing over who’s protecting whom, Sakaki shows a chink in his armor when he demands Haru never let her hair down in front of others after hearing the other male teachers say that Haru is cute when she lets her hair down.

Thoughts: This story continues to dance of the edge of disgusting. I have a feeling the train wreck I wished for has been averted now that Sakaki has made his jealously clear to the reader.

Some girl accidentally meets up with her old middle school boyfriend who she couldn’t go “all the way with”. Oh gosh, this is awful! It’s the last person she wanted to see, and he appears to have a live-in girlfriend. What should this poor girl do? I don’t know because I stopped reading at page 10. I remember reading a oneshot with the very same beginning, expect the male protagonist played basketball. Apparently this is an offshoot of that oneshot. I don’t understand why the mangaka chose to duplicate the oneshot in a addition to dumbing it down.

Kiryuu spends the entire chapter trying to tell Hazuki that he loves her. It’s a sweet end to a very sweet and simple high school love story. I enjoyed this short series immensely. It had the right balance of humor, romance, and innocence to charm me. I highly recommend this series to intermediate Japanses learners who want to read some shoujo. The tankoubon is out now.

Here are the other color pages from the magazine. 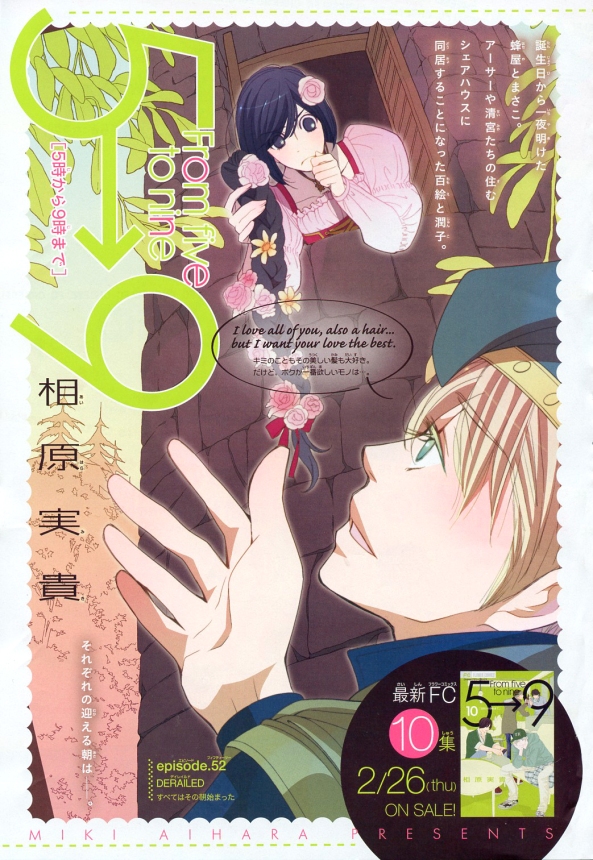 Here is the index from the issue:

And here are the previews for issue 5

Look forward to it. I plan to read the oneshot and the final chapter of “Kagi no Nai Torikago”. I still haven’t made up my mind about whether I’m going to read the second chapter of “The Dragon’s Bride”.