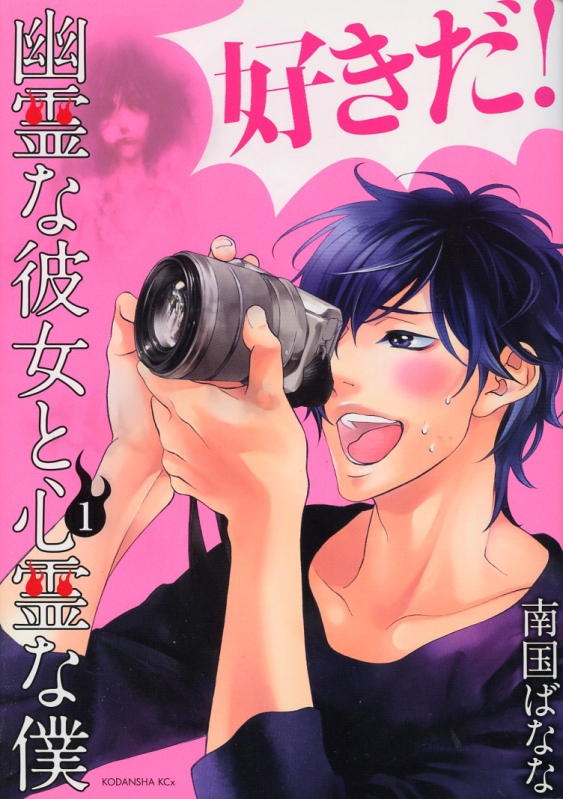 Synopsis: Genji, who’s always wanted to sense and photograph ghosts, deliberately moves into an apartment where a tragedy happened, hoping that the apartment is haunted. The apartment is indeed haunted with a female ghost, and when his cat inadvertently photographs Genji with the ghost, the photo makes the two of them look like a pair of lovers. This leads simpleminded Genji to believe the ghost is in love with him, so he decides to start a one-sided romance with her.

Initial thoughts: I love the Milkman stories in Wings, so this should be stupid fun. Wow! This manga is nuts! I love it!

Artwork — A: A curious thing happens in the manga. There is a blend of cartoon and realistic drawing styles that separate the corporeal from the ethereal. Genji, his ghost sensing friend, and the neighbor are drawn like typical Banana Nangoku cartoonish pretty people and the ghosts are drawn very realistically with greater attention to “craft”. I didn’t notice it at first until I started thinking about the series. This is amazing because you’d think the two art styles would conflict, especially since the ghosts are so gruesome- looking. 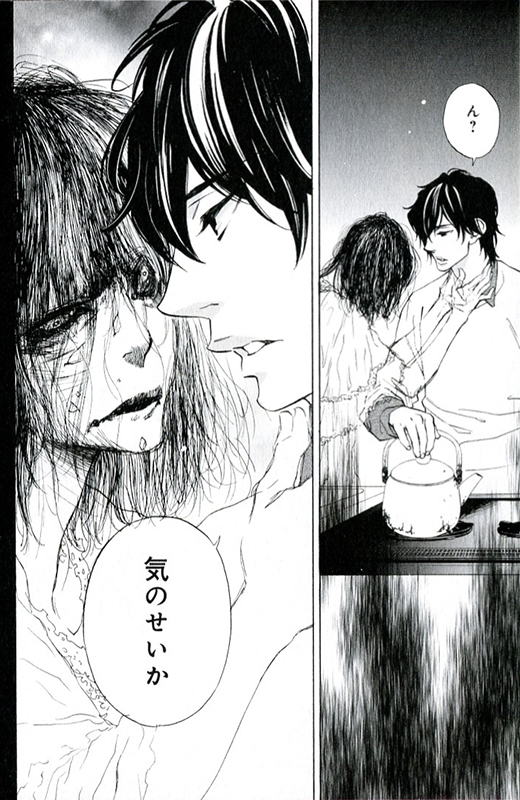 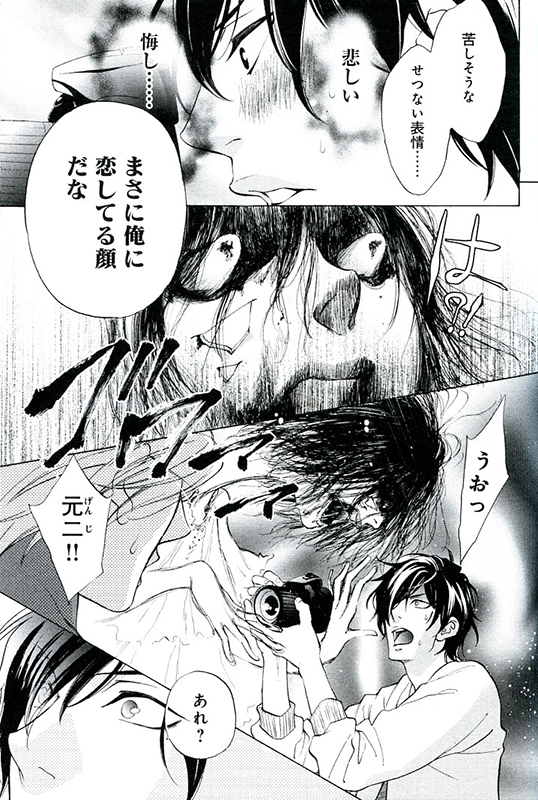 There is lots of use of screentones, but they serve as appropriately placed backgrounds to provide spookiness or to highlight Genji’s childlike wonder and innocence. There is also lots of “motion” in the artwork. The gag physical comedy is easy to follow and drawn effectively. This is a good looking and highly polished series.

Presentation B: This book is larger than typical mass produced josei and shoujo manga books. There are no color pages, but there were no color pages in the Itan anthology either. I’m not crazy about the cover illustration. I think the pink background is garish. Inside, the paper is typical manga stock. The print is reasonably large throughout and the mangaka’s handwriting is cute and legible.

Story A: This manga is hilarious, but very sweet and sad at the same time. Genji is a lovable nerdy type who’s virginity is apparent. His misunderstanding of romantic cues and amoral curiosity lead to some laugh-out-loud comedy. The ghost plays the straight man in this story. She’s easy to sympathize with and I felt a connection as a reader through the outstanding depictions of her facial expressions and ghostly tantrums.  Underneath the comedy, Genji has a sad backstory (that became apparent after I finished laughing and thought about what really happened to young Genji) that he’s made the best of. We only get bits and pieces of the ghost’s back story, but it is key to the story because the ghost doesn’t remember herself and Genji’s too in love with her as a ghost to get to know her as a person. The emotional kicker comes at the end of the volume when Genji’s best friend points out to Genji that he’s been pursuing this ghost because she’s a ghost and he has no idea about her personally. That’s when it dawned upon me that the ghost is never given a name because Genji’s never asked.

There are the usual ghost and poltergeist gags as well as some poking fun at the sexy monster girl manga thing. The flashbacks are weaved smoothly into the story and brought up to move a particular part of the present story along. There are also very few characters in this manga, which keeps the focus squarely on Genji and the ghost. The pacing is fast and I found myself so absorbed in the story that I didn’t notice the passing time as I read it.

Readability — medium: There are limited furigana in the series. The furigana are used to provide readings for names and uncommon words. The vocabulary will be familiar to shoujo readers and the use of kanji is actually rather sparse, with the mangaka or the editor choosing to use a fair amount of hiragana instead. The sentence structures are fairly straightforward, so there aren’t any crazy run on sentence. Because the images are so descriptive, an intermediate Japanese learner should be able to understand the main points of the story.

Overall A: Because the artwork and the story are so engaging and fun, I can completely over look the ugly cover. From beginning to end of this first volume, I was hooked. This series is fast paced and the most fun I’ve had with a series since “Kemono Kingdom: Zoo”. I highly recommend this series to those who like silly gag manga. I would love to see this series licensed because it satisfied my josei, comedy, and supernatural manga itches.