Synopsis: Kanna’s father, who is a carpenter, brings home a live-in apprentice, Katsuhiko. As part of his training, Katsuhiko is told his only girlfriends are his tools and is forbidden from having a romantic relationship with Kanna. The story follows Katsuhiko as he learns carpentry hands on from Kanna’s father, while inevitable forces push Kanna and Katsuhiko together.

First Impressions: Finally a manga about guys with hand tools! Moe! I adore Kanna’s father and Katsuhiko (Kan-chan) at home and when they are working together. They are like a cute father/son pair. The romance between Kanna and Kan-chan is adorable. I already see them married. Hurry up and have babies, okay.

Art A: I love the simple cover illustration and the color illustration on the inside flap. All of the characters are nice to look at and have lots of cute facial expressions. The page layouts are clear and relatively clean for a shoujo series. While there are lot of screentones used, there aren’t many sparkles, flower sprays, and dramatic showy sound effects to clutter up the pages. The hand tools and power tools are drawn with the appropriate amount of detail. I like how Kan-chan and Kanna’s father move. The two of them have wonderful physical comedy moments and are just plain sexy at times (those collar bones). I love the worker pants that Kan-chan wears and his jacket too. Of course I’m biased towards handsome ojis with hand tools. As for Kanna, she looks her age and does not suffer from toddler face. Oh, and let’s not forget Kanna and Kan-chan’s the soft and flowy hair. 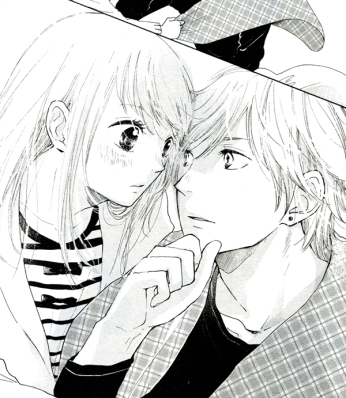 Presentation B: There are no color pages, but I do like the cover a lot. Some of the handwritten text is too small to read easily, so I did have to do some squinting. Overall, it’s a typical shoujo tankoubon.

Story A: This is a slice-of-life series, so there is no plot. Rather it shows the progression of Katsuhiko from the first time he meets Kanna’s father as a gloomy orphan child to now, as a cheerful young man who’s passionate about building. I like how the mangaka actually spends story time on the various construction sites. It gives the reader some insight into Japanese carpentry and Japanese hand tools, which are a little different than the hand tools in the US. More than just construction, the story covers how Kan-chan handles a child getting injured on some playground equipment he built, and there’s a cute story in which Kanna’s father takes Kan-chan to meet a master carpenter, who happens to be Kanna’s grandfather. Yes, there is a budding romance between Kanna and Kan-chan. Per shoujo manga land rules, at first Kanna objects to having Kan-chan as a live-in, but as she grows to respect Kan-chan as an apprentice carpenter, she also starts to develop feelings for him. Character-wise, Kanna is sweet, caring, and wifely. She’s fairly even tempered and sensible. Kan-chan, on the other hand, is emotional, passionate, and energetic. Everything he does is adorable, or so I thought. He’s boyish and Tigger-like when he’s not doing construction, and manly when he is doing construction. As they say, “All girls want Tigger”. So there you have it.

Readability — Medium Easy: I learned some new carpentry words, otherwise the vocabulary is typical shoujo. There aren’t any gnarly run-on sentences or challenging grammar. An intermediate learner should be able to grasp the basics of the story.

Overall A: This series was made specifically for me. I am convinced of this. I love Tigger, I love guys who use hand and power tools to build stuff, and I love watching and learning about construction. This series has a bishonen and a handsome oji, so it’s great for females of any age. I love that the story is serious about carpentry and construction, while also focusing on family and work ethic. The love story between Kanna and Katsuhiko is natural and very sweet. It definitely gave me the dokis at times. Now all I need is an IV so I can put this series directly in my veins. Do I think others will like it? I don’t know how the target audience feels about carpentry. Carpentry is an important part of this story. You could say it’s the framing upon which the story is hung. If you like guys using hand tools and think carpentry is cool, then this is THE shoujo for you. If carpentry isn’t your thing… I really don’t know. Perhaps someone else who’s read the first volume could give a different perspective.

Like Loading...
tagged with Ammitsu, Kanna and the Apprentice, Kanna to Decchi, Kanna to Detchi, Manga, manga review, shoujo