My Thoughts on the “Sabaku no Harem” Lala Special Chapter

Having already translated Chapters 5 and 6, I can say that this special chapter is a transitional chapter between volume 1, which now seems like a prologue to me, and the chapter 5 and beyond, which start the actual story.

First off, this chapter made me keenly aware of how full of crap Prince Kallum is and how naive Mishe is. The only differences between Mishe’s former slave owner and Prince Kallum is that Prince Kallum calls his slaves a harem and he doesn’t physically abuse his slaves. Otherwise, just as when she was a slave, Mishe has no freedom. She can’t leave the inner palace without Prince Kallum’s permission and she can’t get a job and earn money without the Prince’s permission. As for equality, Prince Kallum seems to glomp onto people who need his protection, wealth, influence, and attention. In other words, his ego needs constant stroking. Given Mishe’s past as a slave since childhood, I can understand how at first she mistakes not being beaten and being able to speak her mind without punishment as a state of “equality”.

I’m looking forward to how Prince Kallum’s and Mishe’s relationship will change. Will the story call Kallum on his bullcrap? I don’t expect Prince Kallum to free his harem. That would be too much outside of the world the story has constructed, but I would like Kallum to come to terms with his world, acknowledge that the harem is another form of slavery, and truly treat Mishe as his equal rather than using her as his ego brush.

Here are some of my favorite scenes from this chapter. I particularly like seeing Mishe be a robust laborer. I think being outside and amongst the people suits Mishe best. 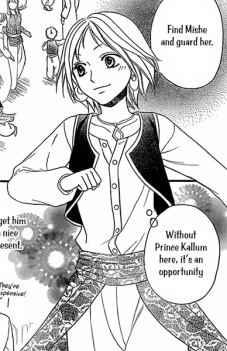 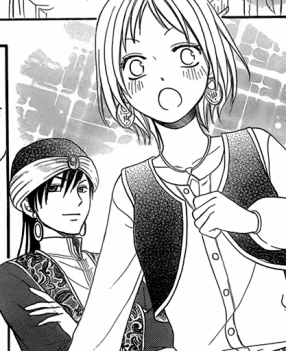 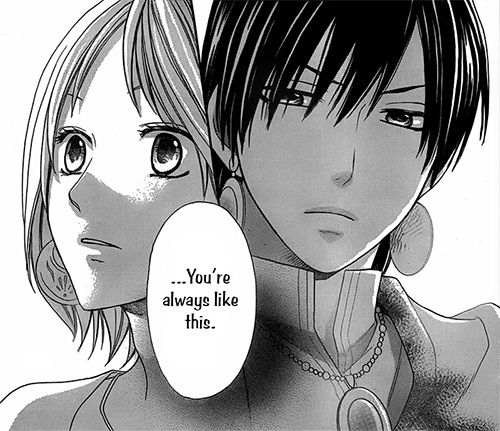