“Koisuru Harinezumi” (“Hedgehog in Love”) is on the cover of the March 2015 issue of Betsucomi. The furoku is a the “Otegami memo” (Letter Memo). The first section includes little note papers which on one side you can write a little note, and with the image on the back, the paper can be folded into a little letter. It looks like a pad to make little notes to pass in class. There a second section that’s purely memo papers sheets. There is one of each letter note and memo sheet for each current series in Betsucomi. It’s kinda handy.  Here’s the cover. It’s decorated with all the cute Betsucomi animals.

Here are some samples of the notes and the memo paper. 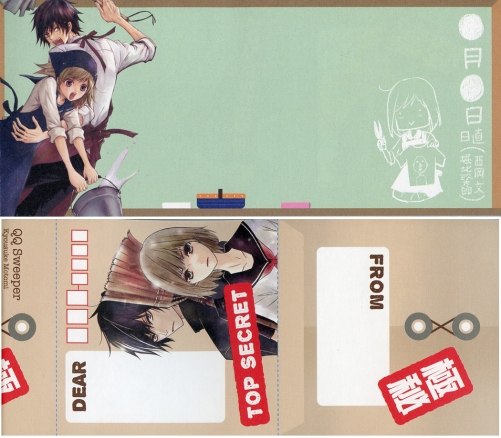 Here’s the index from the back of the magazine that lists the contents.

Here’s what I read. 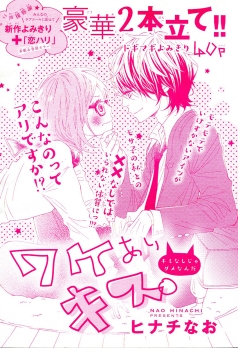 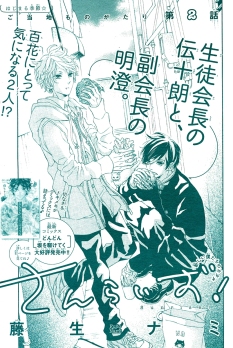 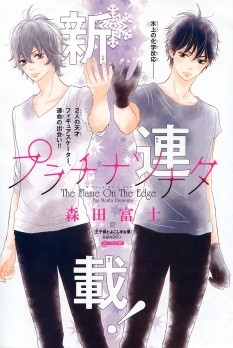 Pages from Wake_Ari_Kisu_Tweets (Includes images from the oneshot)

Summary: Popular boy Yamabuki suddenly sprouts cat ears. With a kiss from unpopular girl Mochida, the ears disappear. Kissing becomes a daily habit, which leads to some complication because Yamabuki wants to protect Mochida from being gossiped about.

Mini Review — B: The premises is stupid and seems to be a metaphor for raging hormones and boners, but story was so honest, the pacing was so good, and the character were so likable, that I couldn’t resist liking this oneshot. Also the art was nice. However, this story has been told many times, so it lacks overall originality. 楽しかったです。

Summary: A girl, Matsumoto, gets dumped after a month because she’s too quiet for her boyfriend. He says he doesn’t know what she’s thinking. Matsumoto has a hard time speaking despite the feelings welled up inside of her. Enter Uchida who’s in the middle of a violent break up himself. Blah, blah. blah… Matsumoto and Uchida go on a joyride on a bike with no breaks a few times. Then Uchida suddenly has to move to Hokkaido and Matsumoto works up the courage to confess before he leaves. Uchida’s all “Boo. You tell me this before I leave. This sucks.” The End.

Mini Review — B-: There was a whole lot of dead wood in this story that could have been cut. I like the drawing of them enjoying their bike rides and there’s a nice bicycle wheel motif used throughout the story. I’d say flip through the oneshot to see the artwork, but the story is too weak to waste time reading. Only the pacing saved me from boredom. 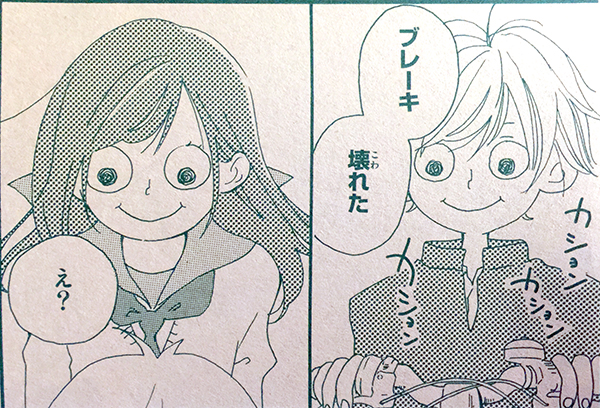 The couple discovering the bike’s brakes are broken.

Summary — In chapter 2, Den goes to stop a fight between the baseball and the soccer teams. He saves Moka from accidentally getting hit by the butt of a baseball bat and takes the blow himself instead. Moka noticed earlier that Den was hot, so Den goes home early with a fever. Aki asks Moka to visit Den and give him some onigiri. He’ll come later after club activities.

At Den’s house, Moka learns that Den had a little sister who died named Moka. Together with Aki, they use to eat dinner because their parents were always out until late working. A cat comes by and pulls the plaster off of Den’s bat-bruised face. Den asks Moka to put on a new plaster. Moka is self-conscious and admits to herself that she likes Den as she applied the plaster. On her way home, she see Aki. Aki is Den’s next door neighbor. As Moka is walking home, a pack of random guys hits on her and Aki intervenes and escorts Moka home. Earlier Moka and Aki did an air high-5 because Aki isn’t good with females. This time, he high-5s Moka for real and gets flustered. Moka wonder what it will be like between the 3 or them the next morning. End of chapter 2. 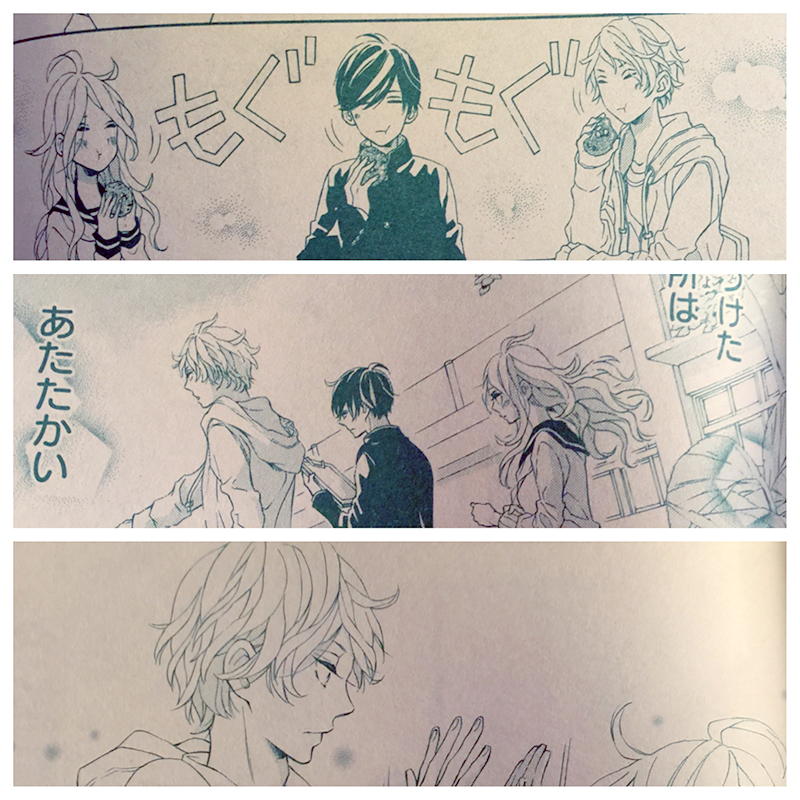 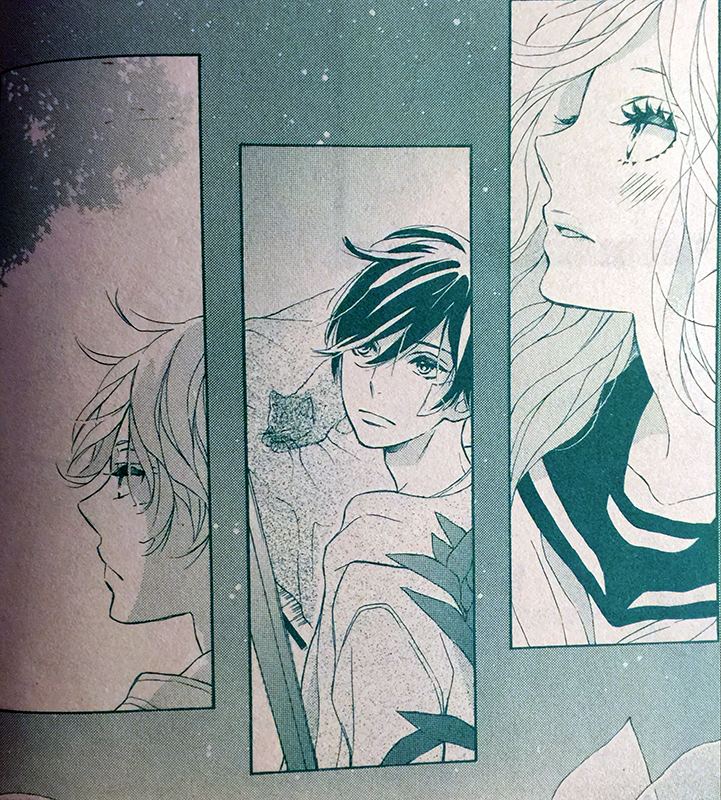 This series is only planned to be 3 chapters, so the next chapter will be the end.

Summary — The second chapter spends a lot time introducing some of the other prostitutes and showing everyday life in the brothel. As for the story, it’s around Akane learning that a smile is a prostitute’s strongest weapon. Here’s a very quick summary:

Akane was betrothed to a guy named Seijirou. He’s come to the brothel to get Akane back. He doesn’t want to see Akane fall like this. The Owner reminds Seijirou that Akane belongs to them regardless. In walks Omiya with his “oresama” attitude declaring he permits no man to have Akane and she’s not Seijirou’s fiancee; she’s a whore. And Akane decides to put on her best smile and declares her past self dead and her present self is a whore who belongs to the brothel. And at the end, some servant named Riichirou that Akane was flashing back to at the beginning of the chapter, walks in to the closet that Akane is crying in. End of chapter 2.

Platinum_Sonata_chp_1_Tweets (Includes images from the chapter)

Summary — Teru is a happy-go-lucky guy who works at an ice rink and loves to skate. While Ice Prince Naohisa Izumi’s home rink is under refurbishment, he will practice at Teru’s rink. Facing the pressure of being the child of a famous skater and winning multiple junior championships himself, the joy is not in Izumi’s skating. However Izumi’s coaching rep sees Teru joyously skating to Izumi’s music and decides to make them a practice pair.

Mini Review — C: The mangaka is not even trying with the story. It’s the usual set of ice skating manga cliches. The artwork is nice and is the first chapter’s only saving grace. べたべた。。。

Here are the color pages from the other selections in this issue. 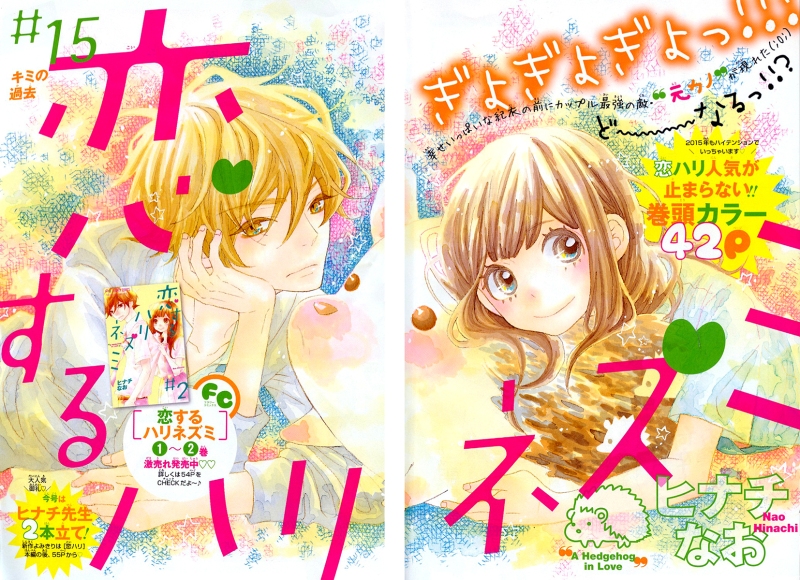 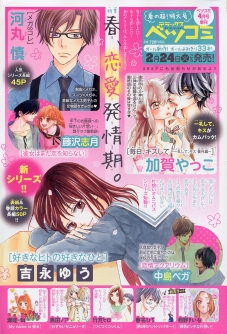