Kanako Sakurakouji’s new series “Seirou Opera” (“Brothel Opera”) is on the cover of the February 2015 issue of Betsucomi. The furoku is the “Bitter and Sweet Emotion” collection of oneshots. Just in time for Valentine’s Day, there are 5 oneshots that involve chocolate candy. There are also some short gag mangas too.

Here is the index page for this issue:

There are two new series and four oneshots, 2 of which are extra chapters for existing series.

This time, I’ll start with the contents I read.

“Seirou Opera” — This series is about 15-year old Akane, the daughter of a samurai family who enters a brothel after her parents were murdered. She is told that at 15, she’s too old become a prostitute, but instead she can hone her traditional arts skills and become a geisha.  But Akane insists that she wants to become the best prostitute ever, so the brothel’s madam, the Okami, asks the top prostitute, the Oiran, to take Akane under her wing. The Oiran, Asakeno, refuses to set aside her responsibility for her other “little sisters” and take on Akane. The Okami insists, so Asakeno says she will take on Akane if Akane can bring in a paying customer off the street. Akane accepts the challenge and runs into some old guys she can’t handle. While running away, she flashes back to the scene of a double murder to remind herself of why she came to the Red Light District in Yoshiwara. She runs to the Inari Shrine where she meets a young man who’s interested in being her customer, but Akane looks into his eyes and surmises that he is “the enemy”.

Akane returns to the brothel thinking that she failed Asakeno’s challenge, but in walks the young man from earlier, Oumiya, who now says he wants to buy Akane out of the brothel. Akane refuses, insisting that she wants to become a prostitute, and the Oiran backs her up. Oiran Asakeno proposed that Oumiya wait two years while she trains Akane in the ways of whoring and if after he’s still interested, he can then buy Akane out of the brothel then. Oumiya accepts the challenge and Akane becomes famous for refusing Oumiya, who happens to be Yoshiwara’s sexy bad boy.

Mini-Review — As usual, Sakurakouji’s mains have the same faces as the previous mains from other series. Because it’s a historical Edo series, Sakurakouji uses the opportunity to draw some pretty clothes and decorated backgrounds. This manga has a similar look as Chika Shiomi’s “Yukarism”, but the storytelling isn’t as compelling as Shiomi’s work and the artwork doesn’t have Shiomi’s graphic “pop”.

Even when considering that this is a historical tale, Akane’s insistence on becoming a prostitute bothers my soul.  Given that most of Sakurakouji’s past shoujo heroines have been “bland girls”, I don’t have much hope for Akane even though she seems firmly set on whoring. Still, I am interested in where this story is going to go. Will it be the the dreamy nostalgic life in a fantasy-Edo brothel, or will it get into the harsh realities of whoring, love, and competition. Either way, I’m prepared for the usually bland girl x bad boy romantic pairing. For now, I’ll say it’s okay, but I’ll take a wait and see stance before settling in on an final opinion. 順調です。

“Sunrise!” — This series centers around a high school girl named Moka. Due to a lung illness caused by smoke inhalation, Moka was hospitalized long-term and missed her first year of high school. Now she’s back in high school, but she has to repeat her first year. Her friends have moved on to second year, leaving Moka out of the in-crowd. While eating lunch alone, she bumps into a sleeping young man from her same class. They enjoy a lovely moment in the sun until the guy’s friend shows up and promptly pulls the guy away from Moka. Later, Moka is asked to join the student council where she learns the sleeping guy, Denjuurou Kajiya (“Den”), and his friend Aki are the student council President and Vice President. Den is called “The Old Man President” because of his slow pace and old-man tastes. Aki is afraid of females and also seems to move at a different pace than everyone else. Moka is a robust tomboy. She impresses Den and Aki with her carpentry skills and shows no fear of lizards.

Kajiya orders a school clean up during which some chuckleheads set some trash on fire. The idiots flee and Moka tries to put the fire out, once again putting herself in smoke inhalation danger. Of course the two boys come to Moka’s rescue and criticize her for learning nothing from the fire drills in elementary school. As they are walking home, Aki thinks of Moka in a nostalgic way, while Den sees Moka as something new.

Mini-Review — This is a great first chapter. The pacing is good, I love Moka and boys characters, and the art is pleasing. I love the way Moka is drawn with bright eyes and fluffy wild hair. She looks like she’s full of life.

“Sayonara Limit” — In this oneshot. Satomi Maki has been experiencing a run of bad luck. She’s been falling into ditches, getting pooed on by birds, getting water dumped on her head and so on. She goes to Hagimoto’s Exorcism Service in hopes of dispelling the bad luck. Hagimoto says the price for the exorcism will be $900, but after wrangling him into a consultation, Hagimoto decides that Satomi can pay for the exorcism by cleaning his house.

Hagimoto discovers that Satomi’s grandfather is haunting her. Satomi wonders why her grandfather would hold a grudge against her. While hanging out with Hagimoto Satomi recalls the time spend with her grandfather and how strict he was about cleaning and how he would ease her fear of the dark with roaring laughter. At first the haunting was only pranks, but when it starts to get dangerous, Hagimoto performs the exorcism. Satomi visits her grandfather again. He says he wanted to live to see Satomi as a bride and that he was lingering because he didn’t want Satomi to forget him. Satomi says her goodbyes, which ends the story.

Mini-review — I enjoyed this oneshot a lot. It’s always a treat to get a shoujo story about family bonds instead of high school love problems. Fortunately the mangaka stuck to the story of the Satomi and her grandfather and let Hagimoto remain a medium between the living and the dead instead of making him a love interest. I did shed a tear at the end because Satomi’s reunion with her grandfather was precious. I highly recommend reading this oneshot. おつかれさまでした。

Here are some of the frontis pages from other key series in the this issue.

These are the tankoubon releases for January. 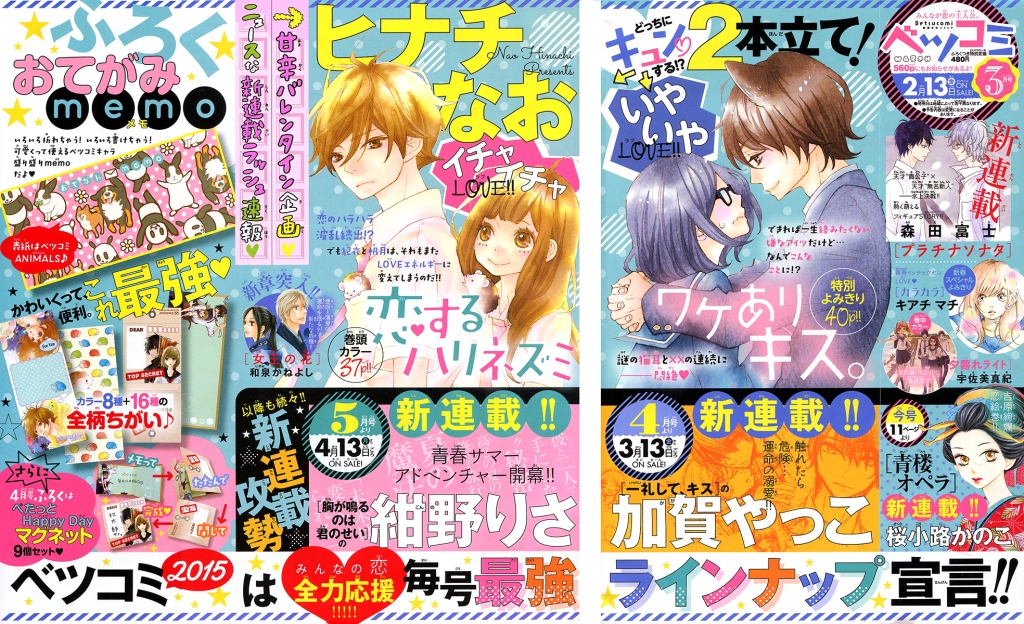 Now is a good time to start Betsucomi if you are a new reader. 5 new series are debuting starting with this issue. Betsucomi Issue 3/2015 releases on February 13th in Japan.