Augh! It’s always hard to start talking about “Kanojo ni Naru Hi” with any initial coherence. So I’ll just start babbling and see where my thoughts take me. First of all, the stalking is just a mcguffin to talk about gender and sexuality. I guess I would have a similar reaction to Mamiya’s to having my underwear stolen, but I would call the police, because crazy people are unpredictable.

Anyhow, I’m still trying to understand this Japanese notion of “cute” and what is expected of a “feminine” female. Mamiya seems perfectly feminine to me. She’s just one of those women who doesn’t take any shit and knows how to defend herself. From my point of view, Mamiya is an idealized confident women. But in the world of this story, her bearing and behavior are considered “uncute” and undesirable, but at the same time, people treat her like a Goddess. My gut tells me that most of the people in this world have low self-esteem and that people who are confident are considered out of reach like a God, or are intimidating. In the scene with Mamiya eating with her friends from high school, it feels like Shibata is saying “My maniless is so weak, that I need a weak female so my manliness will be evident.” It’s funny to me that Miyoshi has a completely different notion of “cute” from his high school friends. He thinks in terms of those intimate moments when Mamiya is emotionally vulnerable, rather than a constant state of vulnerability. I guess it’s a more personal and secret notion of “cute” rather than a general objective notion of “cute”.

This brings me back to the dynamic between Mamiya and Miyoshi. It seems like Miyoshi is asking Mamiya to tone down the bravado because she is now a woman. He says it’s for her protection, but at the same time he mulling over whether Mamiya is rejecting being “female”. Interestingly, he does add that little bit about social pressure forcing behavior change. I think if anything, Mamiya rejected the social pressure to become “cute” (that’s how it seemed to me in the chapter 6), but in my mind that has nothing to do with “femininity” so much going along with the social male-female power imbalance. But with Mamiya, it’s always about being in control and wrapping Miyoshi around her finger. It was same before Mamiya became a female. Recall that Mamiya would challenge Miyoshi and win so he could make Miyoshi be his slave. Ahhh… but I believe that Mamiya has always loved Miyoshi and became a girl after finding girly mags under Miyoshi’s bed — in other words “Miyoshi is not homosexual”, so Mamiya became female so she could be with him. Anyhow, i get a kick out of seeing who’s “on top” at the end of each chapter.

Speaking of homosexuality, the notions of “gay” in this series are weird to me. Just because a guy thinks women are scary, doesn’t lead me anywhere near the conclusion that the guy is gay. I conclude that the guy has had some terrible experience and now he’s afraid of women. Since when has two guys sharing an apartment been suspicious?! And since when has a guy not wanting to tutor teenage girls led to “gay”?! Maybe the guy doesn’t want to be bothered with potential crushes. I can’t help but laugh every time this series approach the subject of homosexuality and transgender identity. But I can’t figure out whether it’s making fun of these notion or whether it’s being serious within the context of Japanese society. 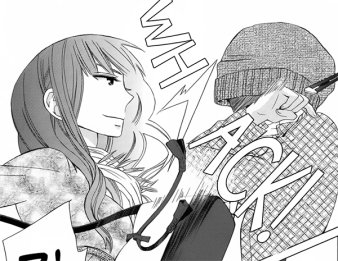 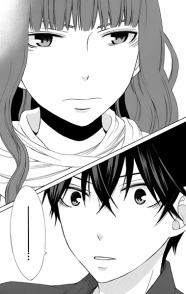 The next chapter of “Kanojo ni Naru Hi” will arrive here tomorrow. I’m pretty psyched to see what happens next.