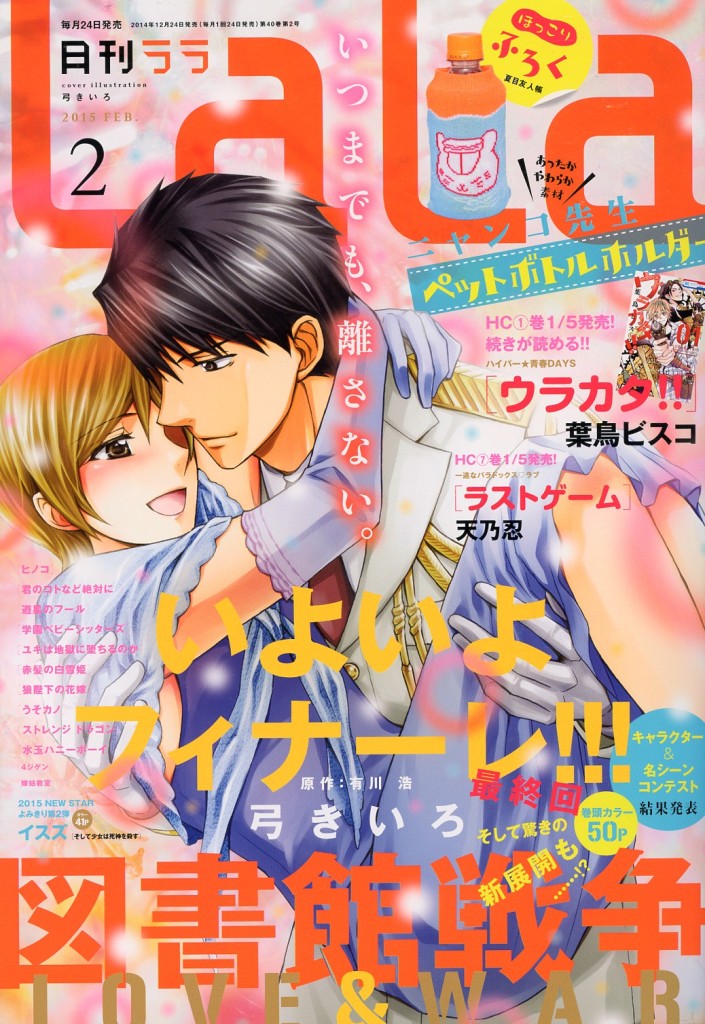 “Library Wars: Love & War” is on the cover of the February 2015 issue of Lala magazine. This issue includes the last chapter of the series, some of which I intend to spoil thoroughly. If you don’t want to be spoiled, stop here. You have been warned.

The furoku is a weird Nyanko-sensei bottle cozy. I’m not sure why you want to put your bottle in a cozy, but it fits. I suppose you could use it as a mobile phone sock too.

Bottle in the cozy 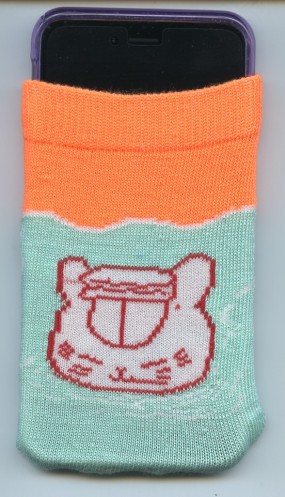 iPhone 6 plus in the cozy

Next up is some information about Lala/Melody online.

To be honest, all I care about is “Sister to Vampire” (“The Nun and the Vampire”). It’s RACY and flat out scandalous. There are two chapters out now, which you can read in Japanese legally for free. If you like light-smut, go give it a read. Here’s a link. There is a PC reader and readers for Android and iOS.

A bunch of new content was posted in the last two weeks to Lala/Melody Online. I haven’t had the chance to read the new stuff yet, but I intend to soon.

And now for some “Library Wars: Love & War” spoils. The frontis spread features the results of the reader’s favorite character poll. I’m partial to Shibasaki.

Basically, Dojo and Iku kiss through half the chapter, so here’s a slide show of the kissy moments.

And lastly… Even though I like babies-ending the best, I’ll take wedding ending anytime too.

There’s a lot more to the ending, but I figure folks ought wait for the licensed English release. I’m sorry it’s so far away, but that’s the way licensing works in the US.

There are only two other color frontis pages in this issue. 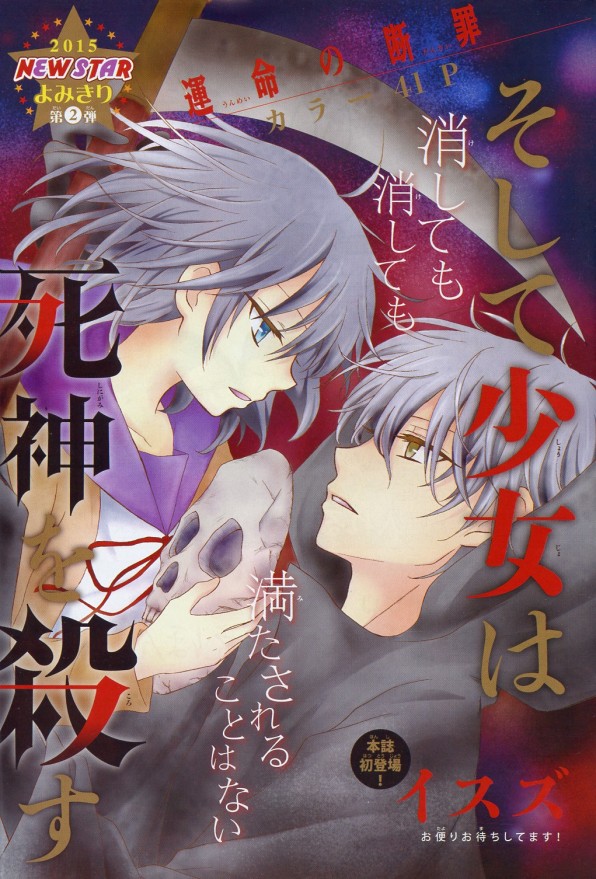 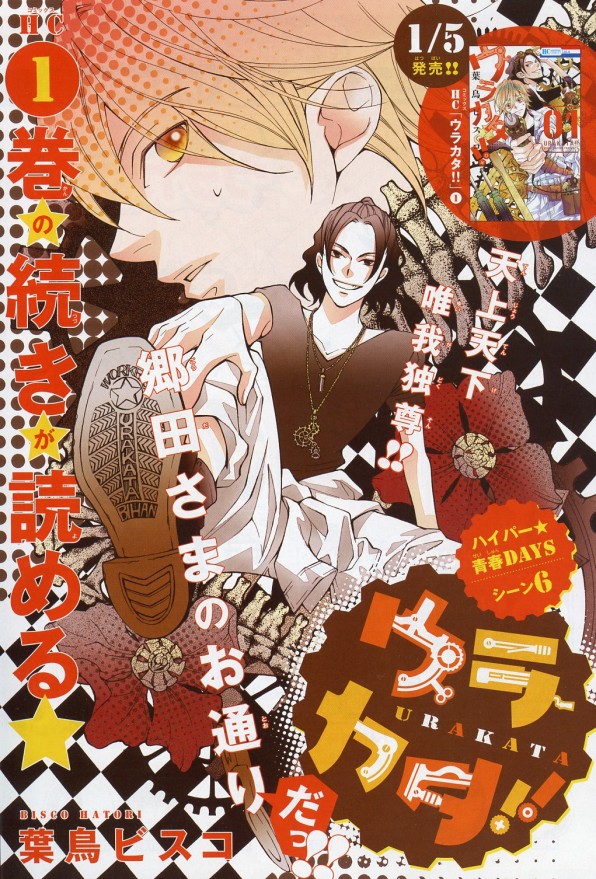 The oneshot “Shoujo wa Shinigami Korosu” is about an orphan, Tsue Otoji, who “kills” Shinigami when they come before her.  The King of the Underworld sends a certain Shinigami, disguised as a human school teacher, to investigate Otoji, who says she can’t die until she meets a certain someone. The underlying story is good, but the pacing is bad. A three or four-chapter short series would have served the twist of the story better, because a twist like this needs the reader to be emotionally invested in the characters for maximum payoff.

“Urakata” is one of the latest series from Bisco Hatori (“Ouran High School Host Club” & “millennium Snow”). The first chapter didn’t hook me, however, her other series “Petite Peche” is a joy! 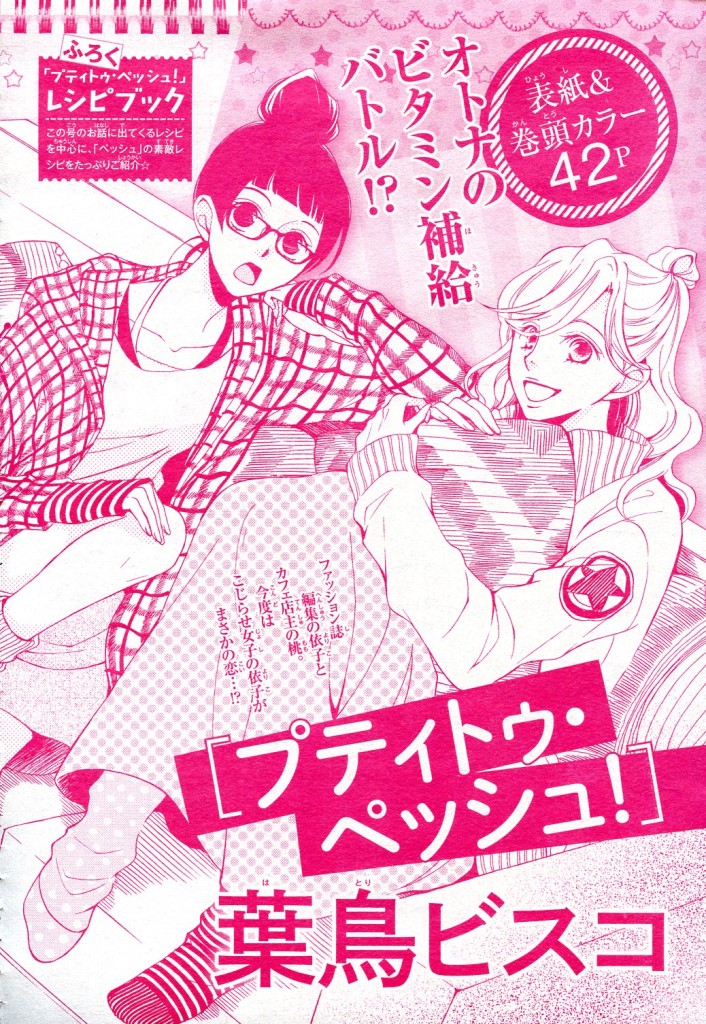 The third installment of “Petite Peche” will appear in the upcoming issue of Ane Lala which releases on January 5th!

Last up are the previews for Lala Issue 3, which will release on January 24th. 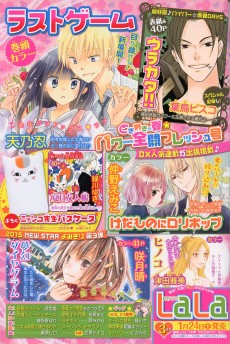 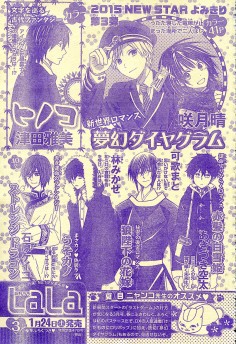