What I Tried to Read Earlier: "Rafnas" by Yumiko Shirai 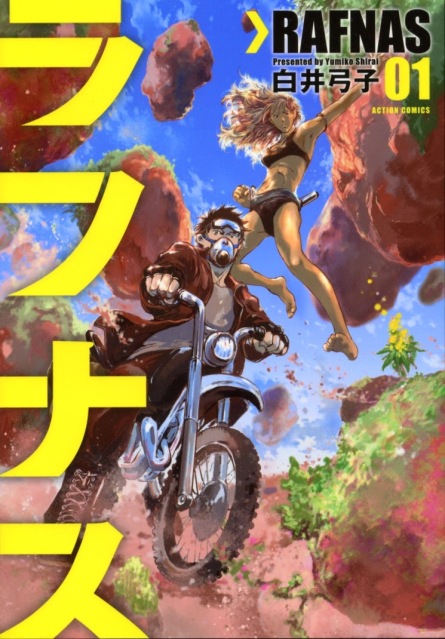 Synopsis: A second planet has has covered the land. The rivers of floating land are known as “Rafnas”, and humanity has split into people must live in the Rafnas and people who cannot. Rima, a Rafnas dweller who has an incredibly high force field, has been named the new observer and protector because she can repel the rivers of debris and animals in the Rafnas. Ragi, a “returned ancestor” works in a mine and represents the “returned ancestors” in Rafnas politics. This is the love story between the woman who “flies” the highest and a man who cannot fly.

First Impressions: Wow! Cool! Looks like there’s gonna be a lot action! Ouch! This is some difficult Japanese!

Artwork A: This manga is beautiful! And this is one of the few action manga that where I can follow the motion in the drawings. The backgrounds and the character designs are detailed and full of life.  Each page is a feast for the eyes and fun to look at regardless of Japanese literacy.

Presentation B: I’m so sad the color pages from the magazine aren’t included in the compiled volumes. They were magnificent! Instead there are included as black-and-white two pages spreads. Otherwise it’s a typical manga compilation. The cover illustration is one of my favorite. Rima looks amazing leaping through the sky.

Story B:  First of all, I only got through half of the volume before the difficult Japanese beat me into submission. So this review will only cover the first 3 chapters. The first three chapters are devoted to world creation. It talks about the Rafnas, the great disaster that brought about the Rafnas, and the evolved humans who live in the Rafnas. The pacing is good and the world is interesting. The male male character Ragi is an everyday blue-collar guy. He’s gruff, friendly, and very sincere. Rima is overpowered, but she makes up for it by being very humble and doing her best to protect people from interference of her overpowered force field. Rima is a would-be goddess, but everyone in the world of Rafnas are good country folks, so they don’t mind the goddess and treat her like everyone else. As usual, I enjoyed the old-folk banter. Unfortunately, the technical babble got in the way of me fully enjoying the story. I wanted more banter.

Overall B+: The pretty pictures are enough to make this a worthy purchase. If this were in English, I’d eat this up, but sci-fi wrapped in Japanese was too trying on my patience. If you’re fluent or at an advanced level of Japanese, I highly recommend this title. When people start talking it’s a lot of fun!